Athletes of RFT Germany compete at ‘Kingz of Cauliflower’ event with good performances. 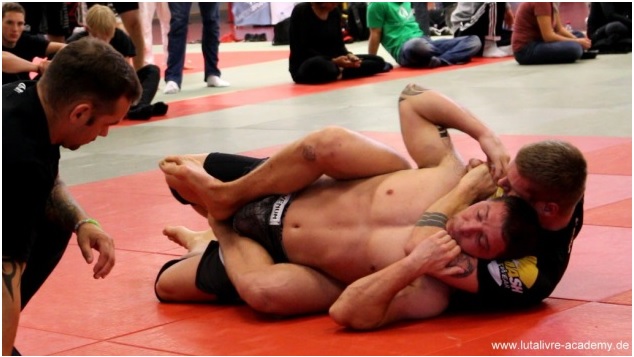 RFT-athlete Julian Hoffmann adjusting a Mata Leão at his opponent

On 11/10/14, "The Kingz of Cauliflower Submission Wrestling Tournament" took place in the city of Lübeck. The format of this tournament was victory by submission only, without a points system. The Renovação Fight Team Deutschland nominated three athletes for this event.

RFT Germany national coach Nico Welko said: "The tournament was a great opportunity to gain experience and to examine the maturation of tactical and technical skills of these athletes under competitive conditions [...]". After a very meticulous video analysis of all fights, Laurenz Hoth was awarded the Yellow belt and Marcus Riehl was promoted to yellow belt 4th degree in Luta Livre awarded by Welko. In addition, Julian Hoffmann was praised for his bravery and power as an orange belt in the advanced class.

The RFT Germany national coach emphasized in summary "[...] they were well deserved graduations according to the Luta Livre culture. We want to give real graduations, completely objective and transparent, and especially to guarantee the RFT quality".